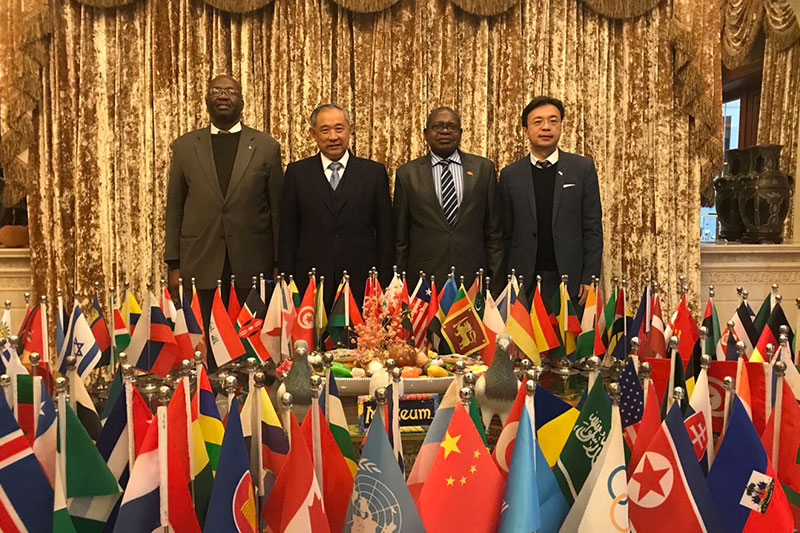 On the afternoon of November 20th, Mr. Martin Chedondo, Zimbabwe’s ambassador to China and his colleague visited the China World Peace Foundation and held in-depth talks on promoting China-Zimbabwe friendly relations. The ambassador recalled China's selfless assistance to Zimbabwe in its struggle for national independence and Liberation in the 1960s. China and Zimbabwe established diplomatic relations on the day of the independence of the Republic of Zimbabwe. Chinese revolutionary history has inspired Zimbabweans from generation to generation. High-level exchanges of visits and economic assistance between the two countries have set a good example of solidarity and cooperation in China and African countries.

Accompanied by President Li Ruohong, the Ambassador and his colleague visited the Peace Garden Museum. President Li and ambassador held friendly exchanges on how to strengthen the relations between the two governments and peoples. In terms of the development future relations between two countries, President Li Ruohong put forward positive ideas in the areas of  international politics, economy, culture, art, science and technology, education, medical care and public services. Ambassador Chedondo expressed his deep gratitude to President Li for his sincere and constructive suggestions, his vision for Zimbabwe's governance and his selfless dedication.

The ambassador wanted to introduce advanced science and technology from China to increase the value of his country's agriculture and economy. The ambassador proposed that China and Zimbabwe jointly develop their mineral resources for mutual benefit. Dr. Li Ruohong, President of the China World Peace Foundation, pointed out that both countries boast unique history and splendid civilizations, and he himself has a deep understanding of Africa. China has a strong cultural heritage and Zimbabwe wants to get more support from China in the development of cultural industry. President Li said the development of tourism can promote mutual understanding between the two peoples and increase economic revenue. In addition, traditional Chinese medicine such as artemisinin and acupuncture can also enter Zimbabwe, which will save more African lives. Going forward, the two sides can hold salon activities, enhance publicity effort on media and establish funds to help more Zimbabwean students in China. The two sides have made preliminary plans to celebrate the founding of Zimbabwe and the 40th anniversary of the establishment of diplomatic ties in 2020.

After the meeting, the ambassador exclaimed the peace dividend is the most cherished commodity by mankind. Peace is the anchor for development, peace is the anchor for uniting the world. I congratulate the Peace Garden Museum for the sterling work of being ambassador for peace building bridges of friendship. Keep up the good work and long Live the friendship of mankind. Congratulations the People’s Republic of China on the 70th anniversary celebrated in peace, prosperity and a vision for a shared future of unity,peace and solidarity.