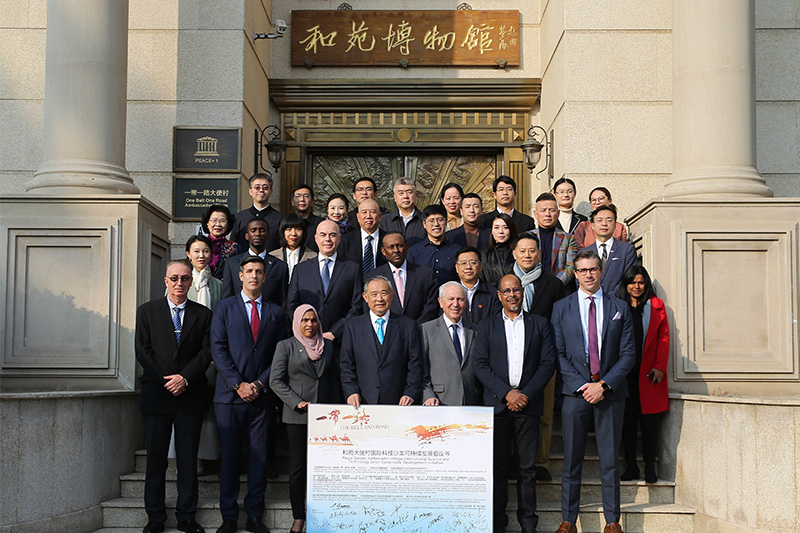 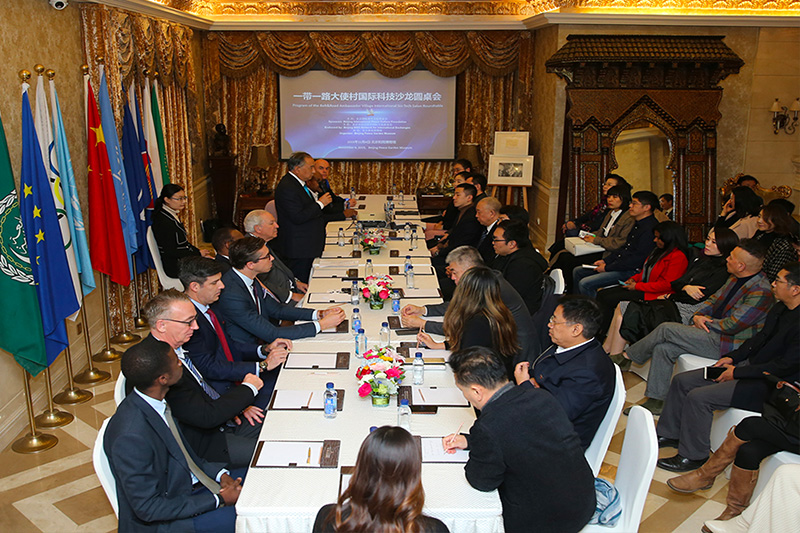 Mr. Li Ruohong, President of China World Peace Foundation and Beijing International Peace Culture Foundation said in the speech,"Peace Garden International Science and Technology Salon" was an important way for the people-to-people connection, science and technology diplomacy,and civilization advancement. It was also a practical platform for exchanges and cooperation between governments and the people of various countries. It showed the prospect of "Belt & Road" inter-civilization cooperation.Through this platform,  scientific and technological innovation will be promoted, social welfare will be supported,and sustainable sci-tech achievements will be shared.

H.E Ms. Aishath Azeema, Ambassador of Maldives in China said: Maldives joined President Xi’s Belt and Road Initiative in December 2014. The Belt and Road has become a key to 21st century development platform. It helped bring countries and people together. The Chinese Government has supported the implementation of a number of important infrastructure projects in the Maldives, including the construction of the China Maldives Friendship Bridge, the expansion of the Velana International Airport, and a number of other projects in the housing sector. The people and the Government of Maldives highly appreciated China’s contribution in the social and economic development of the Maldives.In the future,innovation and cooperation in science and technology would inject new vitality into Maldive's economy.

Mr. Jose Roberto, Head of Technology of Brazilian Embassy pointed out that this year has witnessed many important events in the bilateral relations between China and Brazil. Mr.Bolsonaro,newly elected President has just led a delegation to China. Vice President visited China in May, half of Brazil's 27 state governors led delegations to China this year. Brazil and China enjoyed a long and fruitful cooperative relationship in the space field.Brazil and China were highly complementary economically. There will be two major events in science and technology between Brazil and China next year. A delegation of basic sciences will visit China and exchange views with their counterparts in the first half of next year and the delegation from the financial technology industry will visit China in the second half of this year.Brazil has huge potential in financial technology and mobile payments, and at least two unicorn companies have Chinese investments.The counsellor thanked the Foundation for inviting him to participate in the international science and technology salon. He highly appreciated the promotion of the innovation spirit of "ZGC Forum" through the salon and expressed that he would help more Brazilian companies to cooperate with Chinese counterparts. In the future, he hopes there will be more events held in Peace Garden.

Mr. Alfredo Rolando, President of China Peru Investment Development Association showed digital society" benefits to everyone, and he believed that it was only possible if we empowered spectacular entrepreneurs with the partnerships and tools necessary to solve real problems with technology, transferring and adapting experiences from China, and also inventing new products and services unique to the particular common needs of the region.

Mr. Helmut Anzeletti, Deputy Defense Attache of Austrian Embassy, said that Austria is a neutral country and has maintained friendly cooperative relations with China.Austria had many small but active enterprises in the field of scientific and technological innovation and boasts unique advantages in drone research and development as well as airplane engine. Austria had a world-renowned airplane engine brand manufacturer- ROTAX. China is now making rapid progress in innovative research and development. If China can combine Austria's advantages in related fields,it should be a win-win result.

UNESCO representative Mr. Ali said that the participants at the ZGC Forum fully realized that scientific and technological inventions and technological breakthroughs need to conform to human ethics. UNESCO's science and technology committee is also actively advancing the work in this field.At the same time, fruitful partnership has been maintained between UNESCO and Beijing International Peace Foundation regarding “an interactive cultural alas of cultural interactions along the silk road”.

Chen Jiaoping, Director of Beijing Peace and Health Development Center, introduced “pharmacology and medicine”,one  of the ten themes under the “an interactive atlas of cultural interactions”. Scientific and technological management mode will be used to build a scientific and technological platform for health services featuring intelligence + health, science and technology + medicine, and more contributions would be made to health care, senior care and poverty alleviation.