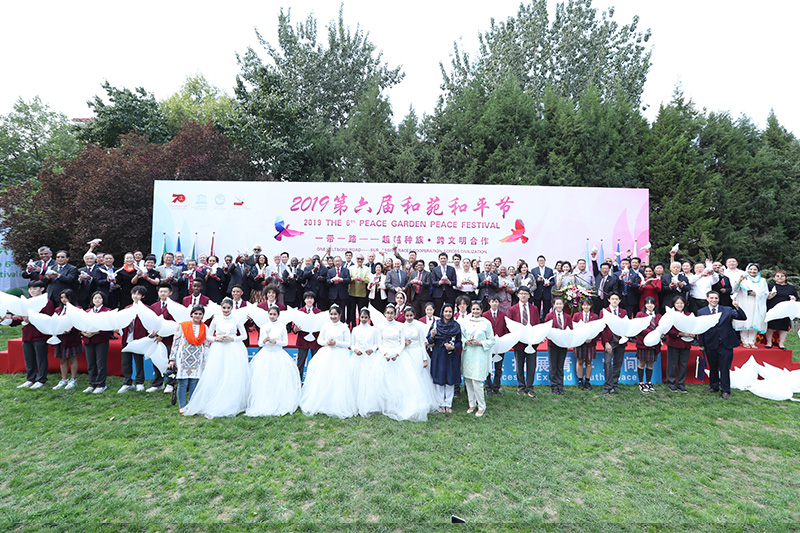 Young people from different cultural, ethnic and social backgrounds gather together to identify racial and cultural prejudices and explore ways and means to deconstruct and challenge the prejudices to promote better mutual understanding.

The participants all agreed that in the time of high scientific development, the common destiny of mankind is closely linked. To let go of prejudice and seek common ground, to uphold the principle of equality and mutual benefit and enable people of different countries, regions, races  and religions to achieve common progress and development are the inevitable trend of peaceful development in the future. 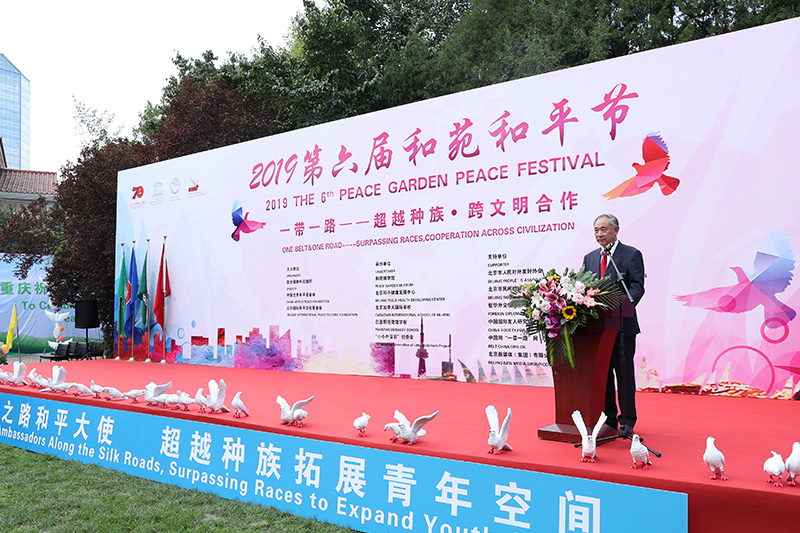 Dr. Li ruohong, Chairman of the China World Peace Foundation and President of Beijing International Peace Culture Foundation , announced the opening of the celebration and said that as we celebrate the 70th anniversary of the founding of the P.R.China here, the theme of this year’s Peace Garden Peace Festival is Belt&Road of Surpassing Races and Cooperation across civilization.Race is external, and there is still historical silence and selective blindness. But there is a seed of peace in the hearts of all RACES and peoples of different cultures, all striving for social justice and human happiness. May our different countries and RACES rise up together and become rich and strong. 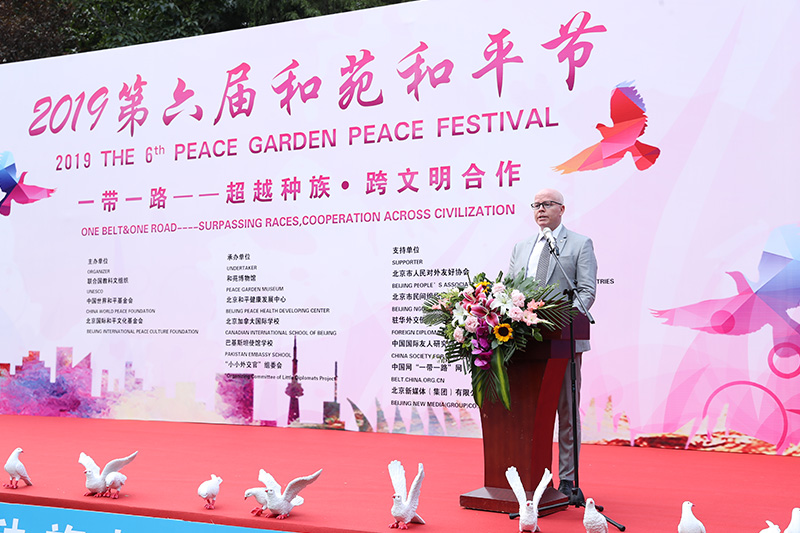 Representative of UNESCO, Mr. Russell read out the congratulatory message from Ms. Azoulay, Director-general of UNESCO, and delivered a speech after announcing the launch of the second global youth photography competition.

Representative of UNESCO, Mr. Russell read out the congratulatory message to Peace Festival from Ms. Azoulay, Director-general of UNESCO , with special emphasis on the concerns about global climate change, said in the message that climate change is a mixed problem integrated by science, education, culture, and communication problems, and that is why UNESCO with multidisciplinary nature of mobilizes to fight for the earth and peace .

Mr. Russell also said: It is a special honor for me to be invited by my friend in China, Professor li, a long-term partner of UNESCO . On behalf of UNESCO, I would like to welcome all of you to attend the 6th Peace Garden Peace Festival on the occasion of the 70th anniversary of the founding of the People's Republic of China. The time is ripe for today's youth to live, learn, communicate, and work in an increasingly connected and virtual world -- with opportunities to learn from each other, experience the traditions of others, and enrich other civilizations through educational, cultural, linguistic, and professional exchanges. This is the significance of the Peace Festival. 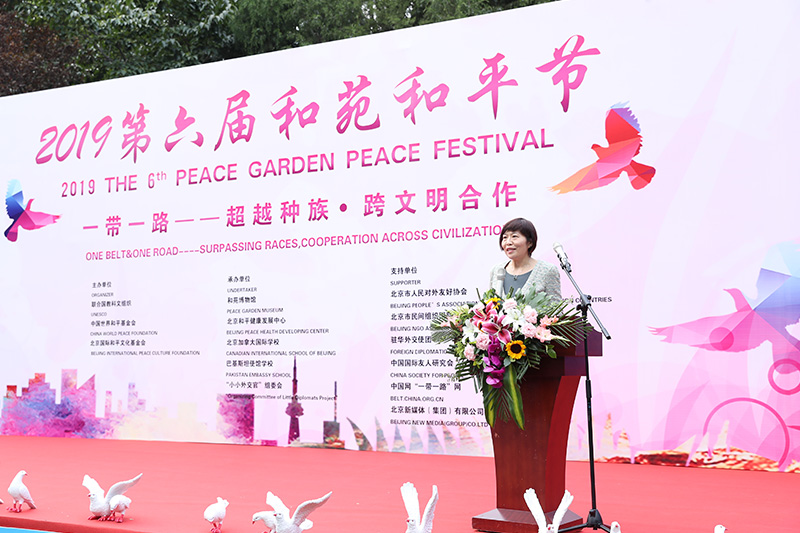 Ms.Zhang qian, executive vice President of Beijing people's association for friendship with foreign countries and Beijing NGO Association for International Exchanges addressed at the conference: Since ancient times, the concept of advocating peace and harmony has been deeply rooted in the civilization of the Chinese nation for more than 5,000 years. This year's Peace Festival, which coincides with the 70th anniversary of the founding of the People's Republic of China, is undoubtedly of greater significance. Today, Chinese and foreign guests will focus on the theme of "One Belt And One Road", surpassing race and cooperation across civilization , and exchange views on such topics as regional conflict alleviation, global governance, youth growth and international rescue. We hope that all of you can use the platform of Peace Garden Peace Festival to actively explore effective ways and means to further enhance mutual understanding and build a solid bridge of friendship, hold high the banner of peace and cooperation, and work together for the construction of a better future in a peaceful world. 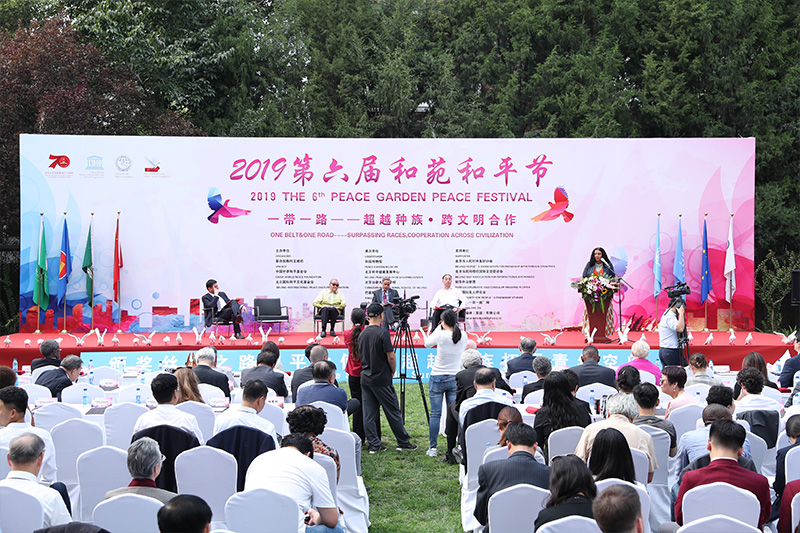 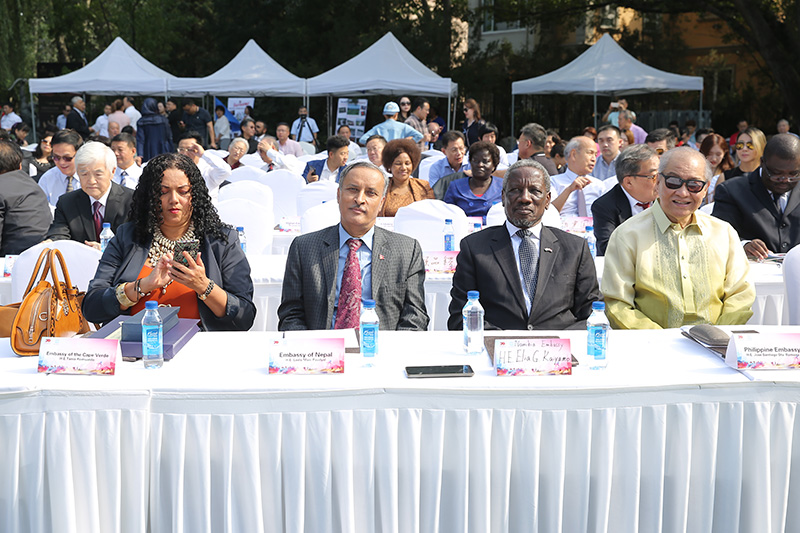 Ambassadors spoke at the celebration, focusing on the theme of the event.

Philippine ambassador to China,H.E.JOSE SANTIAGO L. STA. mentioned in his remarks that the ebbs and flows of history tell an enduring story of different voyages but a common destination – peace. Our peoples - in the Philippines, in China, in Asia, and in the world – have persisted and prevailed through wars, re-shaping of politics, technological changes, and social upheavals. He congratulates and extends his gratitude to our organizers –China World Peace Foundation, Beijing International Peace Culture Foundation, and UNESCO. This annual activity is a call to action for all of us to carry the beacons of peace.

Ms.Jimena Jaen Baltodano,Chargé d’affaires of Costa Rica Embassy said: As we understand it, peace is not just the absence of war, but also actions that seek to guarantee social justice, equality and dialogue, therefore, peace is a process that never ends and requires that we work together with tolerance among our differences.This said, peace cannot be forced into another nation nor can it be imposed, therefore, is important that international and national peace education institutions be promoted, in order to strengthen the spirit of tolerance, dialogue, cooperation and solidarity among all human beings.

Mr.Zhou hongyu, President of the Yangtze river education research institute, said that to give suggestions is the mission of think tanks. Through various channels and opportunities, we continuously put forward suggestions to the National People's Congress, the CPPCC national committee and relevant departments of the ministry of education on strengthening international cooperation and promoting global education governance. In addition, we have also organized and carried out the first evaluation study of global education think tank. Later on, Ms. Hu wanqi from the strategy research institute will release the report of global education think tank for you.

H.E. Tania Romualdo, Ambassador of the Republic of Cabo Verde said that We need urgent action for the sake of our planet, the well being of present and future generations and the survival of humankind and other species on Earth. We can’t postpone this any more and we should make sure to have everyone on board, specially young people for they represent the future. And that’s also why on this very same day, in New York, the International Day of Peace Student Observance is happening, providing an excellent platform for young people from all over the globe to showcase what they are doing to fight climate change and promote peace. 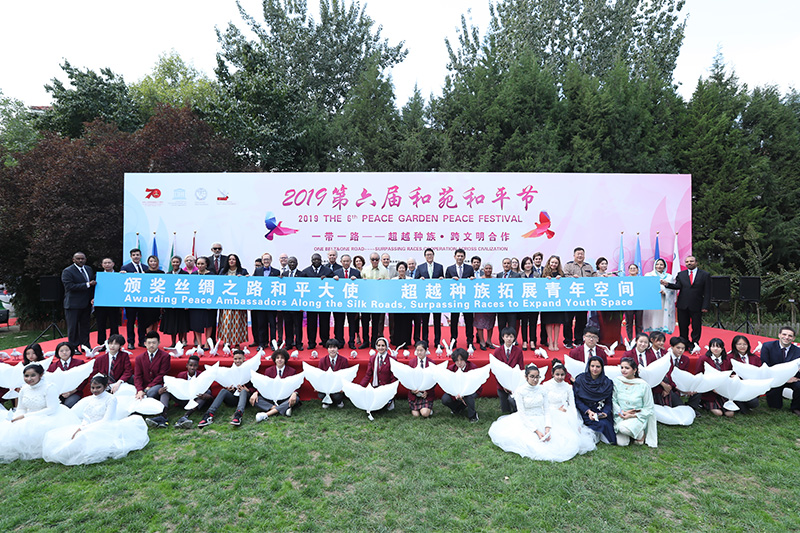 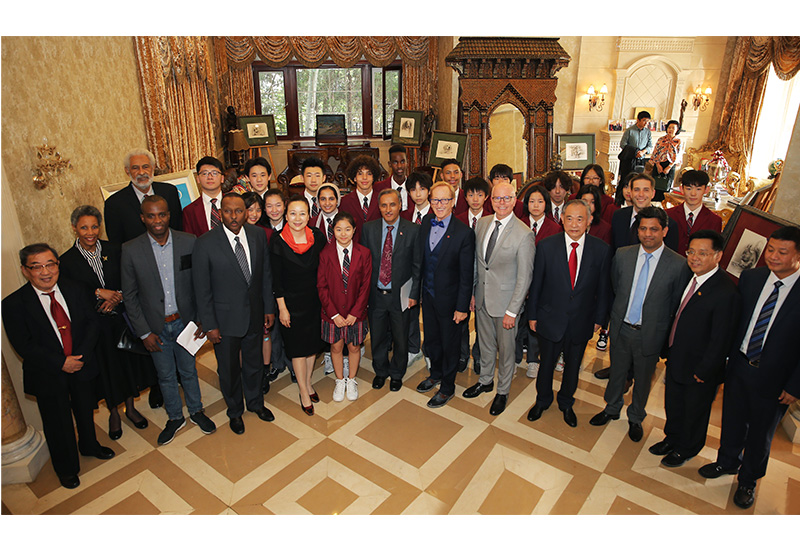 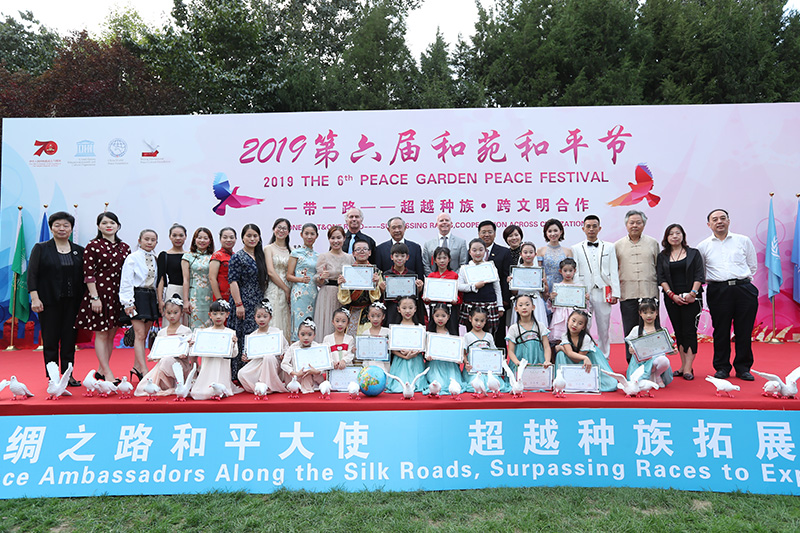 Representatives of teenagers from all over the country took part in the celebration.

At the event, the initiative of awarding peace ambassadors of the silk road and expanding youth space beyond race was launched. President Li ruohong and representative of UNESCO presented the medal of "Peace Ambassador" to the Ambassadors of Peace Garden One Belt And One Road Ambassador village. UNESCO representative Mr. Russell announced the launch of the second global youth photography competition.

Since 2014, China World Peace Foundation, Beijing International Peace Culture foundation , together with UNESCO,hosted the "Peace Garden Peace Festival"in the "World Peace Day" for six consecutive years in Beijing , the leaders, diplomatic envoys, representatives of international organizations, experts , scholars and teenagers representatives released doves, read message from director general of UNESCO,spoke on the theme of alleviating conflicts, global governance, cooperation across civilization, "One Belt And One Road", the youth growth, international rescue. Voices of delegates from all over the world to call for peace on the event were highly appreciated by the international community .